One of the Borromeo's most-loved activities in their residency at the New England Conservatory is the audition process to select the Winners of the Guest Artist Awards. They greatly enjoy the week of collaboration in which every student who has entered the competition has a session playing and working together with the Quartet. Working with all of these students, and affording special recognition to those that are chosen as winners, is always an inspiring experience. 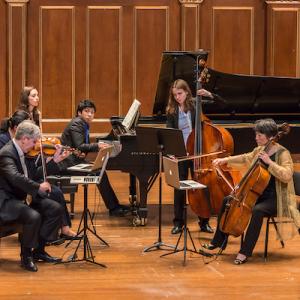