This concert will be in-person only and will not be livestreamed. A delayed broadcast of the concert will stream on the NEC website on June 4. Check back for a link to the stream.

A Note from Anthony Coleman

The ancient Chinese sage Xunzi offers three pieces of practical advice for anyone attempting to talk about ritual. He warns against the temptation to reduce this complex phenomenon to simplistic formulas or strict categories. He also suggests that elaborate theories constructed by means of labyrinthine methodological considerations will only lead one away from reality. Finally, he reminds us that we will never understand ritual if we are apt to look down on what other people do and view their actions from a position of intellectual or observational superiority.  – Catherine Bell: Ritual – Perspectives and Dimensions

Yes...What they said. How to avoid any kind of generalizing or reductionism? How to lead away from theory and toward reality? We certainly don't believe that we look down on what other people do, but how to address semi-conscious othering? Never have I needed Library Databases more.

I went to Grove Music Online. And looked up Ritual Music. I shuddered when I saw that there were 49 pages. I shuddered more when I saw what was on Page One: Moldova/Ukraine/Taiwan/Bhutan/Chile/Yunluo/Belarus/Croatia/Guatemala/Russian Federation/Georgia/Ecuador

Ukraine on Page One! It felt like an oracle had spoken. I am no authority on Ukrainian Music, much less Ukrainian Ritual Music, but it seemed clear to me that, if we were going to do a concert based on Musical Rituals, there would have to be an important Ukrainian element. What more atavistic a ritual are we experiencing in our current day-to-day life than that of people killing other people over land?

Meanwhile, there are many things tonight. To quote Catherine Bell again:
The most clear-cut examples of ritual, those depicting various genres of ritual, tend to be a matter of communal ceremonies closely connected to formally institutionalized religions or clearly invoking divine beings. However, the examples of ritual-like activity suggest that what goes on in ritual is not unique to religious institutions or traditions. There are many ways to act ritually and many situations in which people have recourse to these ways, and degrees, of ritualizing.

The job that we had to do was to sift through the responses to the prompt and to try to tease out to what degree the responses were really dealing with this multifaceted concept of Ritual, were they more Religious-Traditional or more coming out of…the other things. As my late teacher, Donald Martino, once said: Every Performance Is An Approximation. It’s probably better not to think of this concert as an answer, but as a series of questions.
– Anthony Coleman

Julian Kytasty is one of the world’s premier players of the bandura (Ukrainian lute-harp), and the instrument’s leading North American exponent. A singer, multi-instrumentalist and third-generation bandurist, he has concertized and taught instrumental and choral music throughout the Americas and Europe, and is especially recognized for his expertise in epic songs and early bandura repertoire. Born in Detroit, he has a BFA in Theory and Composition from Concordia University in Montreal. In 1989-1990 Kytasty was one of the first North American-born bandurists to tour Ukraine, performing over one hundred concerts. He has often returned to tour in Ukraine and in the summer of 2014 he traveled to sites associated with Taras Shevchenko’s life and poetry at the invitation of the Ministry of Culture of Ukraine’s Shevchenko Bicentennial Project. As a performer, recording artist, composer, and band leader, he has redefined the possibilities of the bandura. Mr. Kytasty is the Musical Director of New York Bandura and founder of Bandura Downtown, an innovative music series based in New York’s East Village that provides a home for creative explorations of traditional and contemporary sounds and themes. He has recorded and performed as a soloist, with the Canadian world music group Paris to Kyiv. He has also worked with musical innovators such as John Zorn and Derek Bailey, as well as cross-culturally with such artists as Wu Man, Klezmer revivalist Michael Alpert, and Mongolian master musician Battuvshin. These experiences have shaped his approach to composition as designing a musical space in which each individual voice and instrument can find room and inspiration to make its unique contribution.

Anthony Coleman has been a key figure in jazz and creative music for decades, making a particular mark on the New York scene along with artists like John Zorn and Elliott Sharp. Known for his creativity, innovation, and virtuosity, his work spans a range of genres including free improvisation, jazz, Jewish music, and contemporary chamber music. Coleman’s musical odyssey has taken him through many cultures and led him to wear many hats as composer, improvising keyboardist, and teacher. Coleman joined the NEC faculty in 2006, returning to a school where he himself studied in the 1970s, during the birth of NEC’s Contemporary Improvisation program (then called Third Stream). Coleman’s work has been commissioned and/or performed by clarinetist David Krakauer, Meet The Composer, Bang on a Can All-Stars, Associazione Alessandro Scarlatti, the Brecht Forum, Merkin Concert Hall, String Orchestra of Brooklyn, and many others. He has presented his work at the Sarajevo Jazz Festival, North Sea Jazz Festival, Saalfelden Festival, and the Krakow and Vienna Jewish Culture Festivals, and been awarded grants from New York Foundation on the Arts, New York State Council on the Arts, and Meet the Composer. He has recorded 13 CDs under his own name, and has played on more than 100 CDs including The End of Summer (Tzadik), which features his NEC Ensemble Survivors Breakfast. 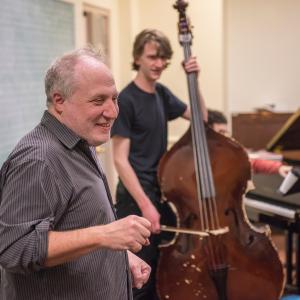