Tonight’s program presents a number of musical styles I regularly perform as a composer/performer fluent in a variety of Western and Ottoman/Turkish music traditions. However, this occasion lining up with the introduction of a new digital microtonal keyboard instrument (with 17 keys per octave) I conceived and designed was completely unintentional. That being said, returning back to Jordan Hall after a three year-long break, I cannot think of a better occasion than this faculty concert for the debut of the Renaissance 17 (R17).
I first had the idea for the R17 back in 1999 when NEC professor and celebrated composer Daniel Pinkham took us to the Carr Organ room in the Jordan Hall building to demonstrate unequal temperaments that were used during the Renaissance and early Baroque Europe on an organ. Until that moment I did not realize that not only such historical unequal temperaments resembled the classical Turkish music tuning system but also keyboard instruments with split keys were utilized especially in Italy in order to accommodate what we would now consider microtonal flavors. Right there and then I remember thinking “why not create a digital instrument that can switch between a variety of temperaments/tuning systems easily while utilizing all kinds of possible instrument sounds via high quality sample libraries?”
After starting to secure a number of prestigious grants in recent years, I started becoming encouraged about pursuing this dream more seriously, as a result of which I secured a LAB grant from The Boston Foundation and over the past 2,5 years worked with Jacob Kaeser, an experienced harpsichord/organ luthier who built an amazing keyboard; Sage Radachowsky who designed the electronics; and my dear friend Melanie Howell Brooks who advised on the technical development of the R17.
Since the R17 was first inspired by early European music, I cannot think of a better way to start this concert than a Baroque organ piece that was intended for an instrument with split keys. The Toccata quarta per l’elevatione by Gregorio Strozzi (1615-1687) is indeed an ideal composition with its slow moving harmonies that fully display the microtonal qualities of this period.
Music from mid-17th century Naples will be followed by music from the Ottoman court of the 17th century Istanbul in the first part of the program. Ali Ufki (also Wojciech or Albert Bobowski), a Polish Protestant who converted to Islam after being taken prisoner by the Crimean Tartars and sold to the court of Ottoman Sultan Mehmed IV (1642-1693), soon found a place in the palace ensemble, compiling a vast and detailed collection of Ottoman/Turkish music which dates from the mid-17th century. I have assembled this first suite from Ali Ufki’s collection by selecting a diverse range of pieces with varying rhythmic cycles and modalities that have not been recorded or even heard in our time.
While the first suite featured never-before performed pieces, the second suite is compiled from what could be considered as the ‘standards’ of the classical Turkish tradition. Even though a few of these pieces may date from 17th (or even possibly earlier) centuries, unlike the previous set, these compositions would be well known amongst the practitioners of this tradition currently and performed on the spot with lots of improvised ornamentations.
Contrapuntal compositions and arrangements based on makam (main modal concept in the Near and the Middle East) have been an interest of mine for at least two decades by now. The Rast Tevşih achieves polyphony by way of adapting the Sufi zikir where an ostinato praising God creates contrapuntal texture against the main melodic line. EΣاר☼, on the other hand, is modeled after imitative polyphony from the Renaissance but based on the Nihavend makam. This composition will slowly evolve and start incorporating a groove oriented collective jazz improvisation during which the Continuum Fingerboard, a flat surfaced keyboardless microtonal synthesizer, and the R17 will be featured along with other soloists.
I wrote the Şedd-i Araban Şarkı dreaming about an instrument like the R17 many years ago. The tuning I will be using for this piece is based on the Şedd-i Araban makam but the harmonic structure as well as the form of the piece follows the jazz tradition. The Hüseyni Jam has been created in the spirit of a jazz jam session and it features harmonies complementing the melody of a microtonal Turkish folk song in the Hüseyni makam which I adapted. This set will end with Can’t put you aside, a piece influenced by makam I wrote back in 1996.
We will end the entire concert with a light Turkish pop song I wrote in the spirit of the Anatolian Rock/Pop genre popular in Turkey during the 1970s.
--Mehmet Ali Sanlıkol 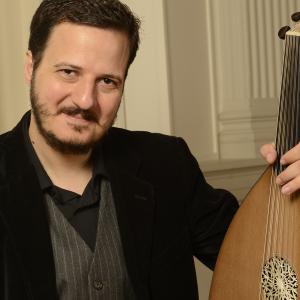