The NEC Chamber Orchestra was created to provide the students with an opportunity to apply the principals of chamber music in a small orchestral setting.  The participants are chosen by audition at the beginning of the academic year and remain together throughout. As the ensemble rehearses and performs without a conductor, leadership responsibilities are rotated for every work performed. This affords the students an opportunity to develop communication skills, take responsibility for musical decisions and broaden their aural and score reading capabilities. Participation in the program also allows them to explore a wide range of the incredibly rich chamber orchestra literature. 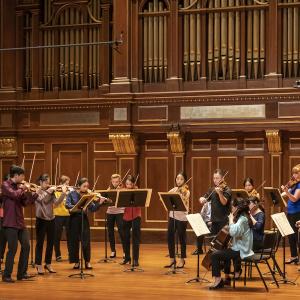