Sometimes throwing together a meal of one’s favorite dishes is the most satisfying – nothing ties it together, each dish stands deliciously alone.  This program puts together music that has been played often here at NEC bringing great reward to the musicians and enjoyment to the audience.   Two French favorites – Baroque dance delights from the court of Louis the 14th (coached by Handel and Haydn’s world-renowned oboist Debra Nagy) is followed by a brass tour de force:  Tomasi’s passionate and reverent Fanfares. John Luther Adams' work for massed flutes was recorded to great acclaim by NEC’s Callithumpian Consort and is coached here by NEC’s own John Heiss.  Michael Tippet broke new formal and rhythmic ground with jewelry Mosaic, the first movement of his Concerto for Orchestra. New England itself claims America’s most important composer – Charles Ives.  His Decoration Day is a musical collage drawn from childhood memories of Memorial Day – the civil war veterans on parade, the horse carts, the fire wagons and of course, the marches played with more passion than accuracy by the village band.  This was the piece that caused Stravinsky to say “There is a great man living in this country – a composer……..and his name is Ives”
-- Charles Peltz 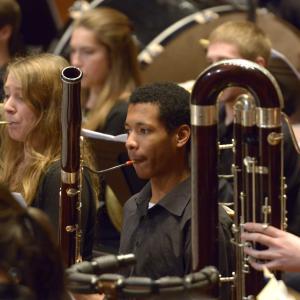