The NEC Wind Ensembles are first in line when given a chance to celebrate music making across disciplines.  This concert brings together musicians of the Wind Ensemble and the CMA departments as we celebrate together the 50th anniversary of  CMA at NEC.  CMA instrumentalists join the Wind Ensemble to play Hankus Netsky’s Klezmer Nonantum Bulgar and on Michael Gandolfi’s landmark Vientos y Tangos variations. CMA vocalists provide old-time New England shape note singing as prelude to William Schuman’s arrangements of Chester and When Jesus Wept. Thomas Duffy join us from Yale for his crossing genres Three Places in New Haven. We celebrate another anniversary as well – the 100th birthday of Stravinsky’s Octet – a work to wind players as a Beethoven symphony is to the orchestra.
-- Charles Peltz 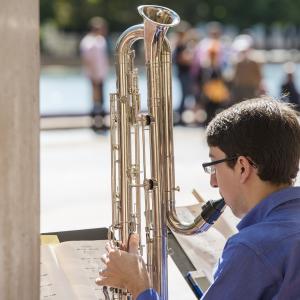