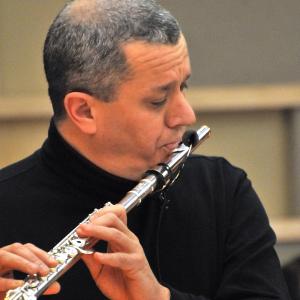 Flutist Amir Milstein has established his career in the world-music scene, founding acknowledged ensembles such as Bustan Abraham and Tucan Trio, with which he has recorded and performed worldwide.

Milstein has performed as a band leader in distinguished concert venues and festivals around the world. He has appeared on several music programs on Israeli television, and has recorded over thirty albums with several of Israel's leading artists, including Matti Caspi, Shlomo Gronich, Gidi Gov, Leah Shabbat, and Miki Gavrielov.

Milstein has also collaborated with several choreographers, including the Israeli Flamenco Dance Company "Compas", Austria's Tanzquartier Wien, and, together with Grammy-Award-winner pianist Alon Yavnai, co-composed the soundtrack for the documentary film Democracy's Outpost.

Since 2002, he has been a faculty member at Hed College of Contemporary Music in Israel. He has also developed a music-education program for The Karev Educational Foundation, and currently presents workshops and clinics at schools, colleges, and universities across the United States and in Israel.

Since 2009, Milsten has taught World Music Ensemble, and Flute for Doublers, at New England Conservatory.