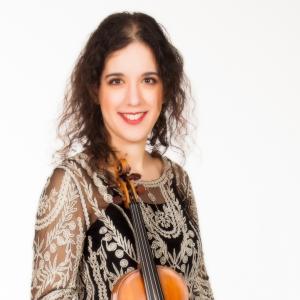 Praised for her “stunning rendition [of Danses sacrés et profanes]” (WGBH Boston) and her
“incredible speed and energy” (Sarasota Herald Tribune), Amy Galluzzo enjoys an active career as
both a chamber musician and soloist. As a member of the Carpe Diem String Quartet, she tours
around the United States, performing a wide range of repertoire. Amy has performed at several
prestigious summer festivals, including the Tanglewood Music Festival, Chelsea Music Festival,
Taos, and Sarasota Music Festival, and has collaborated with artists such as Masuko Ushioda, Carol
Rodland, James Buswell and members of the Boston Symphony Orchestra. More unusual
collaborations include Yihan Chen, pipa, Scott McConnell, steel pan, and Dariush Saghafi, santoor.

Recent highlights include the release of Amy’s first two recordings: The Art of Calligraphy (Albany
Records), featuring the music of one of NPR’s 10 Favorites, Iranian-born Reza Vali, and Volume 4
of the complete String Quartets of Sergei Taneyev (Naxos Records). Current recording projects
include Volume 5 of the complete String Quartets of Sergei Taneyev, and the complete string
quartets of D.C.-based composer Jonathan Leshnoff (both on Naxos Records). This past year also
saw the world premiere of Reza Vali’s Calligraphy no.14 “Ashoob” for string quartet and santoor,
performed with master santoor player Dariush Saghafi and the world premiere of Derrick Jordan’s
Pan-Afrique, for string quartet, congas and steel pan. Carpe Diem String Quartet has been the
recipient of many grants and awards, including the 2015 Chamber Music America Commissioning
Grant, five PNC ArtsAlive Grants.

A finalist in the Naftzger Competition and the New England Conservatory Concerto Competition,
and recipient of the Jules C. Reiner Prize for violin, Amy has been heard in recital and concert
across Europe and America and has served as concertmaster under the batons of conductors such as
Kurt Masur, Raphael Frühbeck de Burgos and Christoph von Dohnányi.

Amy Galluzzo began her violin studies in Great Britain and went on to study with Dona Lee Croft,
a professor at the Royal College of Music, London. Amy received her Bachelor of Music and Master
of Music with Honors, and a Graduate Diploma from the New England Conservatory in Boston,
where she studied with Marylou Speaker Churchill and James Buswell. She has studied with
members of the Borromeo, Brentano, Shanghai, American and Concord Quartets.

Amy maintains a private violin studio in Boston, and teaches through the New England
Conservatory Continuing Education department. She has given masterclasses and workshops at
University of Washington, Carnegie Mellon University, Eastern Arizona College and numerous
music programs for students of all ages and has taught at the Bennington Chamber Music
Conference since 2015.