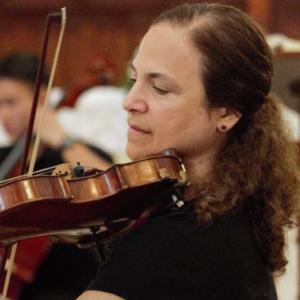 Amy Goodman Wulfman has had an international career as a concert violinist, performing with orchestras in Europe and in the U.S. She studied at the Vienna Academy with Günter Pichler and Michael Frischenschlager, performing and recording with the baroque ensemble Capella Academica under Eduard Melkus.

In the U.S., Wulfman received her B.A. from Yale University, where she studied with Shirley Givens, and her M.M. from the University of Wisconsin, and has been an active performer and teacher. She has played numerous chamber music concerts, including performances at the Bach Aria Festival in Stonybrook, New York, and at the Blue Mountain Festival in Lancaster, Pennsylvania.

Wulfman has served on the faculties of the Lawrenceville School, Choate Rosemary Hall, and Phillips Academy in Andover, Mass. She has taught summer chamber music at  Music on the Hill (Belmont, Mass.), and was co-founder of the New Haven Summer Quartet Camp.