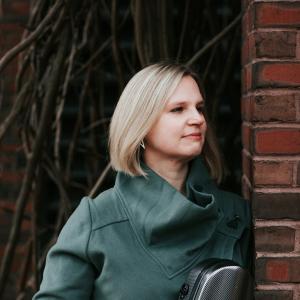 Currently Angela Leidig is on the Suzuki faculty at New England Conservatory and Project Step, teaching both private lessons and group classes since 2013 and maintains a private studio in Somerville, MA as well. She is Co-coordinator of the NEC Suzuki Program at NEC along with colleague Jennifer Fan. She was on the Suzuki faculty at the Longy School of Music in Cambridge, MA from 2008-2013. In the summer, Angela teaches at the NEC Summer SuzukiFest and at White Mountain Suzuki Institute in New Hampshire.

Angela’s involvement with the Suzuki method goes back 40 years. She started playing violin when she was five years old in a Suzuki public school program in Pennsylvania. She began teaching in 1991 while finishing high school, going on to study Suzuki pedagogy and Alexander Technique after completing her performance degrees and has continued teaching ever since. Angela is a certified Alexander Technique (AT) teacher; she is dedicated to teaching young children how to play with an attitude of creativity and enjoyment, developing a technical and musical foundation of ease, balance and freedom from the beginning stages. She works closely with parent and child to develop healthy habits with the instrument and practice at home from the very beginning. Angela teaches AT group and private lessons in the greater Boston area, as well at the Alexander Technique School of Cambridge teacher training program.

She studied and taught AT with Robyn Avalon at Meadowmount String Summer Institute to advanced string players ages 13 and up in 2019 and teaches AT courses at NEC Prep, NEC conservatory and in the greater Boston community. Angela’s violin teachers include Paul Kantor, Helen Kwalwasser, Ed Dusinberre, Benedict Goodfriend, and Judith Ingolfsson. She studied chamber music intensively at Yellow Barn, Kneisel Hall, Musicorda, Point CounterPoint and other summer programs throughout her studies. She started and developed the Chamber Music program at Ann Arbor Performing Arts Center in 2000. She has performed with various trios and quartets over the years including the Congdon Quartet and the Neftali Trio.