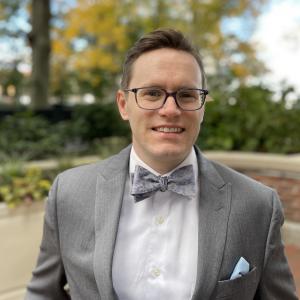 Pianist, coach, and conductor Brett Hodgdon is the chorus master and principal coach at Boston Lyric Opera, where he has served on the company’s music staff for over two dozen productions since 2011. In addition to his work at Boston Lyric Opera, Hodgdon has been a rehearsal pianist for the Boston Symphony Orchestra since 2008, having rehearsed and coached vocal programs for music director Andris Nelsons and many guest conductors, including preparing the children’s chorus for the BSO’s March 2022 concerts of Wozzeck at Symphony Hall and Carnegie Hall.  He has maintained frequent collaborations with the Tanglewood Festival Chorus both as pianist and rehearsal conductor, has performed in recital with members of the BSO, and has appeared as orchestral pianist with the Boston Pops Orchestra.  A frequent performer with the Emmanuel Music Chamber Series in Boston, he has also been rehearsal pianist and coach for their weekly Bach Cantata Series since 2006.

Hodgdon serves on the opera coaching and song repertoire faculties of the New England Conservatory of Music.  In November 2021, he conducted the NEC Graduate Opera in the Boston premiere of Ana Sokolović’s a cappella opera Svadba.  Additionally, Hodgdon teaches courses in diction and vocal repertoire at the Boston Conservatory at Berklee.  Previously he served as music director of the University of Connecticut Opera Theater for eight seasons, conducting over a dozen operas during his time there.

Since 2014, he has spent his summers on the coaching faculty of Si Parla, Si Canta! in Arona, Italy, where he made his international conducting debut with the Orchestra Sinfonica Carlo Coccia di Novara in 2019.  He joined the guest faculty of Canto Louisville in the summer of 2022.

He received the D.M.A. in Collaborative Piano from the New England Conservatory (2014), where he studied piano with Irma Vallecillo and Cameron Stowe, and opera and vocal repertoire with John Greer and John Moriarty.  He holds the M.M. in Accompanying and Chamber Music and the B.M. in Piano Performance from the University of North Carolina at Greensboro.