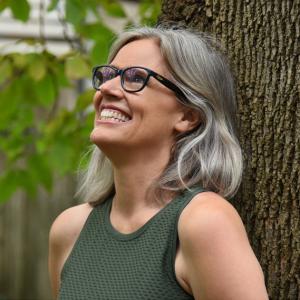 Cristi Catt is a singer and improviser who mixes contemporary, world, and early vocal music in thematic live concerts and recordings. She performs throughout the U.S. Europe and South America and is a founding member of the internationally renowned women’s vocal ensemble Tapestry, winners of Chamber Music American’s Recording of the Year. Her most recent recordings are with Blue Thread, exploring shared stories and ballad migration in collaboration with fellow CI faculty Zihan Weng as well as with Telltale Crossing featuring banjo extraordinaire Richie Stearns and NEC alums Taki Masuko and Corey DiMario. Her interest in the meeting points between medieval and world traditions has led to research grants to Portugal and southern France, and performances with Le Bon Vent with NEC alums Jeremiah McLane and James Falzone, Balmus, Clash of Civilizations and HourGlass. Early music performances include Ensemble PAN and Boston Camerata. She has debuted numerous new works and performed Steve Reich’s Tehillim with the Colorado Symphony and Cabrillo Festival Orchestra conducted by Marin Alsop, as well as at Jordan Hall conducted by Steven Drury. Together with Tapestry co-founder Daniela Tosic, she launched a Spotify podcast during the pandemic: Faces of a Woman.

The L.A.Times writes “the stunning solo excursions by Cristi Catt were as radiant and exciting as any singing I’ve heard all season.” Gramophone Magazine writes, “high soprano Cristi Catt has captured the spirit of Hildegard von Bingen with extraordinary insight”  while Fanfare Magazine describes her in very different terms: “Catt and Tosic sometimes sing in a manner more suggestive of folk, even pop (think Joan Baez or Judy Collins), than classical music. This doesn't seem self-consciously 'hip,' however, and the ease and spontaneity of their singing can't hide their expert musicianship."

She has a passion for the theatre and served as music director for the Boston Playwrights Theatre US Premiere of The Rosenbergs, an opera by Joachim Holbek known for his scores for Lars Von Trier films. She served as music director for Collegebound: The Musical of Life and Debt at Studio BE in Chicago and for productions of Shakespearian comedies in Boston and New York. She has adapted and directed several productions of Hildegard Von Bingen’s medieval drama Ordo Virtutum including a touring production with the vocal ensemble Putni in Latvia and Sweden.

Recordings include Angeli, Celestial Light, Song of Songs: Come into my Garden and Fourth River with Telarc International, Sapphire Night and Faces of a Woman with German label MDG, Goodnight Marc Chagall with Canadian Label Epact and Carmina Burana with Erato/Time Warner. Indie recordings include: Door Ajar and a series of singles with Blue Thread’s Shared Stories-Music Migration project.

Catt also teaches at Berklee College of Music. Previously, she served as a faculty member at Longy School of Music at Bard College and Merrimack College. She presents workshops and masterclasses internationally.

As a teacher, Catt takes a kinesthetic approach, combining singing with imagery and movement to let loose while further developing flexibility, strength, improvisation, alignment and artistic expression. She works with singers, instrumentalists and composers of diverse interests as they explore their unique path, music that reflects their voice, personality and passion. For more information, see her book: The Kinesthetic Singer: Lessons on Singing from Yoga and Basketball.