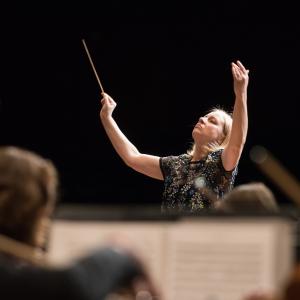 "Woods drew a performance of the Suite No 2 from Ravel’s Daphnis and Chloe that was fluent and well structured…easily capturing the (final’s) overwhelming sense of drive."

Conductor Cynthia Woods mined the mystery from the slow passages, pulling cool smoky tones from the strings and commanding glittering climaxes from the full ensemble.

"Cheers to Woods and the Cambridge Symphony Orchestra for a …Firebird with nuanced hue, elevated gesture and multifaceted orchestration."

Hailed as a conductor with gusto and exuberance (Jim McDonald, the Boston Musical Intelligencer) whose performances have dynamic and immersing outcomes (John Galigour, the Sun Valley News), and recognized for her intelligent and out of the ordinary programming (Vance Koven, Boston Musical Intelligencer), Ms. Woods has become a recognized and respected conductor in the Boston community and beyond.  The Music Director for the Cambridge Symphony Orchestra, Ms. Woods is also a frequent guest conductor, having performed across the U.S., Europe and South America.  Recent engagements include working with the Pioneer Valley Symphony and Opera Southwest on their world premiere of National Endowment for the Arts Commission, Bless Me Ultima, by Hector Armienta.

Ms. Woods began her conducting career with a literal bang, making her debut with Stravinsky’s iconic masterwork The Rite of Spring and the massive 118-piece Worcester Consortium Orchestra.  Since then she has gone on to a successful career, winning acclaim in all idioms, including opera, choral, chamber, ballet and symphonic orchestra.  She has collaborated with some of today’s great artists, including Joan Tower, Lisa Bielawa, Alexander Korsantia, and Gianni Gino di Marco, as well as serving as the Music Director for Oscar winning director Morgan Neville’s (20 Feet from Stardom) documentary on Amar Bose.   Ms. Woods conducted the world premiere of Conrad Pope’s latest symphonic work, The Little Match Girl in 2017.  An icon in the Hollywood world, Pope’s credits include My Life with Marilyn and Tim’s Vermeer. She commissioned and performed a new ballet set to Mendelssohn’s A Midsummer’s Night’s Dream in 2018 and has most recently conducted the world premiere performance of Grammy winning and 6 time Emmy nominee, Nan Schwartz’s, latest work-Angels Among Us, for solo trumpet and orchestra, the performance of which was also broadcast on WHRB radio as a part of their Boston Live series.

Along with her conducting activities, Ms. Woods is also a frequent speaker and writer. She has been a guest lecturer at institutions such as MIT and the Longy School of Music of Bard College, a panelist for radio shows such as WGBH’s Callie Crossley, and was a frequent contributor to The Boston Herald’s State of the Arts blog.  She has also been featured in Boston Magazine, the Huffington Post, Boston.com, the Cambridge Chronicle, The Boston Musical Intelligencier, and Comcast News Makers. She was awarded a scholarship to study violin with the Grammy award winning Takacs String Quartet at the University of Colorado-Boulder, received the Dean’s Talent Award while doing her graduate studies at the Hartt School of Music and won a full fellowship to study composition at the prestigious Atlantic Center for the Arts. In addition to her current roles as Music Director and guest conductor, Ms. Woods is also a member of the conducting and violin faculty for the New England Conservatory. 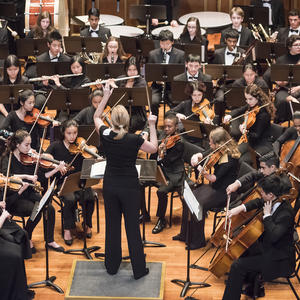