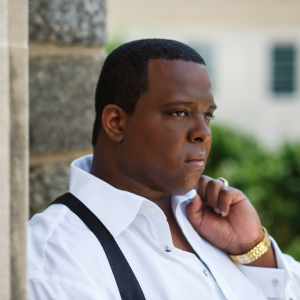 Baritone Joshua Conyers has been hailed by Opera News with “a deliciously honeyed baritone that would seduce anyone” and The New York Times as having “a sonorous baritone” that “wheedled and seduced.”  Mr. Conyers, a native of Bronx, NY, is quickly being championed for his captivating performances as he continues to be recognized as one the promising young dramatic voices of today. Equally active in contemporary opera, Mr. Conyers performed the role of Uncle Wesley in Carlos Simon’s Night Trip for Washington National Opera’s American Opera Initiative and Ed in the world premiere of Everything for Dawn produced by Experiments in Opera with leading composers Kamala Sankaram and Aaron Siegel. Mr. Conyers covered the roles of Mr. Umeya in the American premiere of Huang Ruo's Dr. Sun Yat-Sen in Mandarin Chinese, and Walt Whitman in the world premiere of Theodore Morrison's Oscar, both with the Santa Fe Opera.

For the 2022-2023 season, Mr. Conyers will perform Reginald in Anthony Davis’ X: The Life and Times of Malcolm X with the Boston Lyric Opera and Opera Omaha, cover the role of Garby in Will Liverman and DJ King Rico’s The Factotum with the Lyric Opera of Chicago, and make his international debut performing Policeman 3/Congregant 3 and covering The Reverend in Jeanine Tesori’s Blue with the English National Opera (ENO). In the 2021-22 season, Mr. Conyers performed the roles of Policeman 3/Congregant 3 in Blue with Seattle Opera, Tonio in Pagliacci with Opera Memphis, and Reginald in X: The Life and Times of Malcolm X with Detroit Opera, co-commissioned with The Metropolitan Opera/Seattle Opera/Opera Omaha. Mr. Conyers made a studio recording of the role Reginald in X: The Life and Times of Malcolm X with the Boston Modern Orchestra Project (BMOP) and Odyssey Opera. In the summer of 2021, Joshua was a Fleming Artist at the Aspen Opera Theater and VocalARTS performing the role of Sprecher in W. A. Mozart’s Die Zauberflöte alongside world-renowned soprano Renée Fleming, under the baton of maestro Patrick Summers. Mr. Conyers was an Atlanta Opera Studio Player at The Atlanta Opera for the 2020-2021 season. Joshua performed the roles of Jackie "Tiger" Brown in Bertolt Brecht and Kurt Weill’s The Threepenny Opera, Tonio in Ruggero Leoncavallo’s Pagliacci, and covered Kaiser Overall in Viktor Ullman’s Der Kaiser von Atlantis. Mr. Conyers was a member of the Cafritz Young Artists of Washington National Opera, a program of the John F. Kennedy Center for the Performing Arts for the 2018/19 and 2019/20 seasons. Joshua performed the roles of First Priest in The Magic Flute, John Sorel in The Consul, covered the Reverend in Tesori’s Blue, Jim and Jake (cover) in Porgy and Bess, Giorgio Germont in La traviata, British Major in Silent Night, Donkey in The Lion, the Unicorn, and Me, and Zaretsky in Eugene Onegin. As a Filene Artist at Wolf Trap Opera, he performed Porgy in Gershwin’s Porgy and Bess: A Concert of Songs, Ramiro in Maurice Ravel’s L’heure espagnole, Musiklehrer in Richard Strauss’ Ariadne auf Naxos, Monterone in Rigoletto, Count Capulet in Roméo et Juliette, and the Baritone Soloist in Bernstein’s Songfest which was recorded by Naxos Records. Mr. Conyers fulfilled his residency as a Benenson Young Artist at Palm Beach Opera in 2018.

As a concert artist, Mr. Conyers will make his debut with the Indianapolis Symphony Orchestra performing the Bass Soloist in Handel’s Messiah. Joshua performed the Baritone Soloist in Carl Orff’s Carmina Burana at Carnegie Hall with the Cecilia Chorus of New York under the baton of Mark Shapiro, and made his Memphis Symphony Orchestra debut performing the Bass Soloist in Beethoven’s 9th Symphony under the baton of Robert Moody in 2022. In 2019, Mr. Conyers was a Soloist with the National Symphony Orchestra performing with world-renowned Maestro Gianandrea Noseda and singer-songwriter Ben Folds. Mr. Conyers made his Carnegie Hall Debut in 2018 as the Baritone Soloist performing Mozart’s Regina Cœli, K. 276, Vaughn Williams’ Serenade to Music, Beethoven’s Choral Fantasy and Mark Hayes’ Te Deum under the baton of distinguished composer and arranger Mark Hayes with MidAmerica Productions. Also, Joshua made his debut at The John F. Kennedy Center for the Performing Arts in 2018 as the Baritone Soloist performing Maurice Duruflé Requiem with Manhattan Concert Productions under the baton of Anton Armstrong. As a recitalist, Mr. Conyers will be performing Charles Ives’ Songs of War and Alban Berg's 4 Lieder Op. 2 with the Brooklyn Art Song Society. Additional concert and oratorio credits include Bach's St. Matthew Passion, Brahms' Deutsches Requiem, Maurice Ravel’s Don Quichotte à Dulcinée, Gabriel Fauré Requiem in D minor, Vaughan Williams' Dona nobis pacem, and Ralph Vaughan William’s Songs of Travel and Five Mystical Songs.