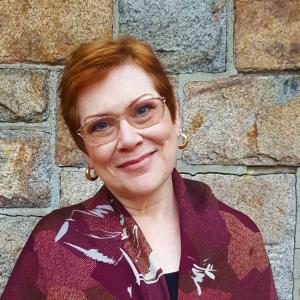 Soprano Karen Holvik brings a wealth of experience in many styles of music to her performances. She began her singing life in the world of popular music and jazz, touring and making recordings for ten years before setting her sights on a career in classical music and earning a Master’s Degree and Performer’s Certificate in Opera at the Eastman School of Music. After touring with San Francisco Opera's Western Opera Theater, Ms. Holvik settled in New York City where she pursued an eclectic musical path, building a large repertoire of concert music, oratorio and operatic roles. Highlights of her work in regional opera include appearances with Houston Grand Opera’s Spring Opera Festival, Skylight Opera, Opera Festival of New Jersey, Opera Illinois, Anchorage Opera, and Texas Opera Theater, singing roles including Constanze, Lucia, Juliette, Adina, Micaela, Marzelline and Baby Doe, and has worked with prominent directors including Christopher Alden and Francesca Zambello, Edward Berkeley, Kenneth Cazan and Richard Pearlman. Ms. Holvik has toured extensively in the United States, and has appeared in Canada and Western Europe singing both popular and classical repertoire. She has been successful in vocal competitions including the American Opera Auditions, Liederkranz Foundation, Oratorio Society of New York, Carnegie Hall International American Music Competition, and Joy in Singing, which sponsored her debut recital at Alice Tully Hall. The Richard Tucker Gala Concert marked her Avery Fisher Hall debut, an event that was recorded by RCA Victor Red Seal and shown nationally on PBS, and she made her Carnegie Hall debut singing Handel’s Messiah with the Masterwork Chorus and Orchestra. Other New York venues in which she has appeared in concert, opera and oratorio include Merkin Hall, the 92 nd St. Y, the Kaye Playhouse at Hunter College, Miller Theater and St. Paul’s Chapel at Columbia University, the Knitting Factory and Dance Theater Works.

Ms. Holvik spent five summers as an Opera Fellow at the Aspen Music Festival, where she was a student of Jan DeGaetani and Arleen Augér and sang leading roles in numerous opera productions. She returned as a guest artist, appearing with baritone, William Sharp and pianist, Steven Blier in a program of songs by George Gershwin as part of the celebration of the opening of the Joan and Irving G. Harris Concert Hall. Also at Aspen she sang the soprano solos in Mozart’s Mass in C Minor and performed Bach’s Cantata 202 in concerts given in memory of Jan DeGaetani. In New York she was featured in three concerts in Miller Theater presented by many of Ms. DeGaetani’s students and colleagues to honor her life and work. Also in New York Ms. Holvik sang at the memorial service held in honor of Arleen Augér.

Thanks to her extensive experience in popular music and jazz, Ms. Holvik has long been a champion of contemporary American song and operatic repertoire, and has premiered works by Ricky Ian Gordon, Aaron Jay Kernis, John Musto, James Sellars, Stewart Wallace, Tom Cipullo and Richard Wilson. She was featured in the New York premiere and on the subsequent tour of Kabbalah by Stewart Wallace and Michael Korie, and appears on the Koch International Classics recording. She created the role of Rose in the premiere of The World is Round by James Sellars on a text by Gertrude Stein, conducted by Michael Barrett. Another premiere, Aethelred the Unready by Richard Wilson, marked her debut with the American Symphony Chamber Orchestra under the direction of Leon Botstein. In subsequent appearances with the ASCO, she sang Samuel Barber’s Knoxville: Summer of 1915. Ms. Holvik has appeared on television, radio and in concert with the acclaimed recital series, New York Festival of Song, and is featured with William Sharp and Steven Blier on a NYFOS recording released by Koch International Classics, Zipperfly; Other Songs by Marc Blitzstein. Ms. Holvik sang concerts throughout the United States as part of Trio Con Voce, with pianist Brian Suits and violinist Kyung Sun Lee, and appeared frequently in New York with the popular series Friends and Enemies of New Music. She was a featured soloist in numerous seasons with the Boulder and Kalamazoo Bach Festivals, and she appeared at the Colorado Music Festival in Boulder singing Mozart concert arias and Beethoven’s Egmont songs. She premiered the songs of Vivian Fung during a residency in Florence, Italy sponsored by the Atlantic Center for the Arts and featuring the composer, Richard Danielpour. While teaching at the Eastman School of Music she sang with the jazz pianist Tony Caramia, performing the music of Billie Holliday, Harold Arlen and Alec Wilder. She appeared with Ying Quartet singing the music of Lili Boulanger, and was featured at the Women in Music Festival, directed by Sylvie Beaudette.

Ms. Holvik began her teaching career at the University of Missouri-Columbia in 1994 and taught at Vassar College, New York University and the Eastman School of Music before joining the faculty of the New England Conservatory in 2008. She was Chair of Voice from 2011-2018, and served on Faculty Council as well as numerous committees and adjudicating panels. She has performed in recital and in concert collaborating with NEC colleagues, including an appearance in the Sextet from Lucia di Lammermoor in the gala concert celebrating the opening of the new Student Life and Performing Center. She is happy to be able to welcome voice students from both the Jazz and Contemporary Improvisation departments at NEC, and her classical students play leading roles in operatic and oratorio performances at NEC and have enjoyed success at competitions and festivals, including the Met Council, Santa Fe Opera and the Merola Program of San Francisco Opera.