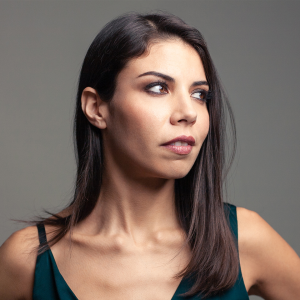 GRAMMY-nominated saxophonist and composer Melissa Aldana joins the Blue Note Records family with the release of 12 Stars, her debut album as a leader for the legendary Jazz label. At 33, the Brooklyn-based tenor player from Santiago, Chile has garnered international recognition for her visionary work as a band leader, as well as her deeply meditative interpretation of language and vocabulary.

12 Stars grapples with concepts of childrearing, familial forgiveness, acceptance, and self-love. “This is a really important album for me,” says Aldana. “I felt like I had so much to say because of all the experiences I had during 2020. After the personal process I went through last year, I feel more connected to myself and my own imperfections — and I’ve discovered that it’s the same process with music. Embracing everything I hear, everything I play — even mistakes — is more meaningful than perfection.”

Just before the lockdown, Aldana went through personal struggles with the end of a relationship. Alone in Harlem, she told herself she’d be busy for years, with plenty of distractions from dealing with her complex emotional response. “But then,” she says, “the pandemic hit, and I hit bottom.” She needed to make changes, so she turned inward. “Because of that personal process, I feel even more connected to my music.” Even the way she practiced changed, allowing her to explore new concepts and endure discomfort.

Inspired by the arcs and nuances of tarot, 12 Stars features a series of tributes to moments of challenge and triumph in Aldana’s New York life. “For some time, I had been very curious about tarot — the symbols, and the actual story of the tradition,” she says. “So I took the lockdown as an opportunity to learn more about myself through the process of learning tarot, whose focus is the journey of an individual. As I studied the cards, I started writing music about each of them, individually. And I found that the process described on the tarot is a process that we all deal with somehow throughout our journey here on earth.”

Throughout her career, Aldana has gravitated toward collaborators who let her sound exist and resonate without restraint. She develops profound connections with bandmates, and the personnel and producer she chose for 12 Stars is no exception. “I love playing with musicians that are strongly rooted in tradition but, at the same time, very open-minded when it comes to music,” she says. The album was produced by the Norwegian guitarist Lage Lund, who also performs as part of a remarkable quintet with Sullivan Fortner on piano and Fender Rhodes, Kush Abadey on drums, and Aldana’s longtime collaborator and confidant Pablo Menares on bass.

A sixth collaborator contributed the album artwork. Aldana asked her close friend, vocalist Cécile McLorin Salvant to share her talents as a visual artist for the release, and many of the album’s themes are manifested in Salvant’s sublime cover illustration. “It felt very natural for me to have her as part of this project,” says Aldana.

She titled the album after the 12 stars that adorn The Empress’ crown. “In numerology and tarot, The Empress is a symbol of creation,” she says. “She represents my essence as an individual, and this entire journey.” Aldana also sought to spotlight her vulnerabilities and celebrate them as part of her artistic process. Her decision to collaborate with Lund rendered Aldana vulnerable, so she chose to indulge that discomfort.

“I’m allowing somebody to enter my music and move things around, which is something I’ve never done before,” she says. “But Lage knows me very well, and I knew that he would be the right person. I wanted to learn by watching his process, to see how he took my music and rearranged it to reflect how he thought about the album.”

Throughout 12 Stars, Aldana’s thoughtful development of bold, melodic statements reaches new levels of persistence. Engineered and mixed by James Farber at Samurai Hotel Studios in Queens, the tracks emit a warm clarity that serves Aldana’s intention. “I wanted to go to the studio and worry about the music and nothing else,” she says. “I knew having James there would allow us to do that.” The mix also features a kind of vertical depth Aldana credits Farber and Lund as having orchestrated intuitively.

The album presents seven striking new original compositions by Aldana that were either arranged or co-written by Lage including the opening piece “Falling,” which Aldana explains was “the tune I was writing when I felt that everything in my life was falling apart.” The piece introduces Lund’s bold harmonic and textural presence immediately. Between statements and inquiries, Aldana develops her solo rapidly, Fortner’s spontaneity connecting to hers at every turn.

“Intuition” proffers one of the album’s most striking melodies. At once commanding and conversational, the tune serves Aldana’s extended arcs of lyrical development. “I had this realization where I felt that all the things that I was questioning and looking for and trying to find meaning for, the answers were in me,” she says. “And I just didn’t want to listen to myself. I didn’t want to trust that what I was feeling was truthful.”

Named for the imagined daughter she met in a dream, “Emilia” features a haunting introduction from Lund and Menares, and a lingering melody line Aldana remembers singing to her dream child as a lullaby. “The Bluest Eye,” titled in tribute to Toni Morrison’s literary and cultural masterpiece, provides the musicians a prism for interactivity. Abadey’s reflexive energy pulses from one section to the next.

The gently roaming piece “The Fool” draws its inspiration directly from tarot. “The Fool is the first major arcana, first card, and it talks about this person that is in the beginning of his journey, going somewhere without a destiny — just a bag and his dog. And he’s not afraid to leave and experience life. That is how we’re brought into this world.”

The Estallido Social, a series of massive public demonstrations and riots that roiled Chile starting in 2019, were the source of inspiration for “Los Ojos de Chile.” “When this happened, despite the fact that I was worried and sad over what my country was going through, I felt so proud to see millions of people going out and speaking up, going into the streets to fight for what they believed were their rights,” recalls Aldana. “Many people lost their sight because they got shot by police officers using riot shotguns with rubber bullets. We held a benefit concert for an organization called Los Ojos de Chile — the eyes of Chile — and it was to raise money for people who lost their sight standing up for their beliefs.”

The stunning title track “12 Stars” presents Aldana at her most lyrical and contemplative, revealing a sound that contains multitudes — regret, determination, joy and acceptance. “‘12 Stars’ is the last on the album but the first one I started writing during the beginning of my process, back in March 2020. I finished its composition a year later in March 2021,” she says. “To me, finishing this tune also meant the closure of a period in my life because, as the legend goes, a phoenix obtains new life by rising from the ashes of its predecessor.”

Aldana was one of the founding members of ARTEMIS, the all-star collective that released their self-titled debut on Blue Note in 2020. The album featured Aldana’s simmering composition “Frida,” which was dedicated to Mexican painter Frida Kahlo, who inspired the musician through “her own process of finding self-identity through art.”

Kahlo was also the subject of Aldana’s celebrated 2019 album Visions (Motéma), which earned the saxophonist her first-ever GRAMMY nomination for Best Improvised Jazz Solo, an acknowledgment of her impressive tenor solo on her composition “Elsewhere.” In naming Visions among the best albums of 2019 for NPR Music, critic Nate Chinen wrote that Aldana “has the elusive ability to balance technical achievement against a rich emotional palette.”

Aldana was born in Santiago, Chile, and grew up in a musical family. Both her father and grandfather were saxophonists, and she took up the instrument at age six under her father Marcos’ tutelage. Aldana began on alto, influenced by artists such as Charlie Parker and Cannonball Adderley, but switched to tenor upon first hearing the music of Sonny Rollins, who would become a hero and mentor. She performed in Santiago jazz clubs in her early teens and was invited by pianist Danilo Pérez to play at the Panama Jazz Festival in 2005.

Aldana moved to the U.S. to attend the Berklee College of Music, and the year after graduating she released her first album Free Fall on Greg Osby’s Inner Circle label in 2010, followed by Second Cycle in 2012. In 2013, at 24, she became the first female instrumentalist and the first South American musician to win the Thelonious Monk International Jazz Saxophone Competition, in which her father had been a semi-finalist in 1991. After her win, she released her third album Melissa Aldana &amp; Crash Trio (Concord). Aldana is also an in-demand clinician and educator and has recently been appointed to the faculty of the New England Conservatory’s Jazz Studies Department.