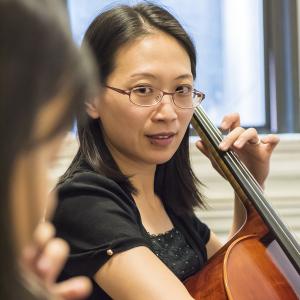 Hailed as one of the 100 Passionate People (Taiwanese American Project), Ming-Hui Lin is a versatile cellist, an avid chamber musician, and a devoted teacher and coach. Broadcasted on the Sound of Hope Radio Station (based in the San Francisco Bay Area) and NYC Chinese American Voice, Lin’s concert engagements have taken her to Europe, Asia, and throughout the United States and Canada, including such venues as Carnegie Recital Hall, Kennedy Center, and Jordan Hall.

In addition to serving on the faculties of the New England Conservatory Preparatory School, Lin is a faculty member of the Powers Music School and was formerly an instructor at Boston University. She has appeared at summer festivals such as Altschuler Summer Music Institute in Italy, Foulger International Music Festival, Composers Conference& Chamber Music Workshop, and Burnside Music Festival.

As a founding member of the New England String Quartet, Lin performed extensively in the New England area and coached at Harvard University's Dudley House where the quartet served as the ensemble in residence in 2012-14. The quartet has been invited to many educational institutes, such as Longy School of Music, Massachusetts Institute of Technology, Brandeis University, and Bentley University. Having made its debut at Weill Recital Hall, the quartet has released seven albums on the PARMA label. Lin has also appeared with the Vermont Symphony Orchestra, Boston Modern Orchestra Project, and has been assistant principal cellist with the Claflin Hill Symphony Orchestra.

Lin has been serving as the music director at the Boston Youth Music Charity group since 2010. She is also a fellow faculty of Boston Music Institute, an artistic and educational organization committed to developing young musician’s full potential through chamber music and outreach engagements. Lin holds a Doctor of Musical Arts Degree from Boston University, a Graduate Performance Diploma and a Master of Music Degree from Peabody Conservatory of the Johns Hopkins University, and a Bachelor of Music Degree from the Taipei National University of the Arts. She is also a certified Suzuki cello instructor.