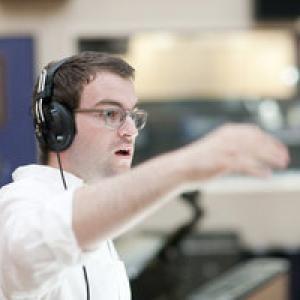 Born in Los Angeles, California in 1985, Nicholas Urie was a recipient of the first annual ASCAP Young Jazz Composer’s Award at the age of 17. He left Los Angeles to study composition with Bob Brookmeyer in Boston, receiving both bachelors and masters degrees from the New England Conservatory of Music. Urie’s music has been heard internationally at festivals and concerts throughout Europe, Scandinavia, and the United States. An active conductor, Urie has led both large jazz ensembles as well as full symphony orchestras performing works that range from straight ahead jazz to contemporary classical music. Urie is an assistant professor at the Berklee College of Music in Boston, MA.

Both of Urie's CD's of original music, Excerpts from an Online Dating Service (2009) and My Garden (2011), earned wide critical acclaim. "All About Jazz" praised Urie's sui generis saying, “Urie does not simply blow off the dust of the large jazz ensemble, he sandblasts it off with Uranium.” At the same time, Urie's unique ability to transform unlikely source material through subtle musical treatment has been widely noted. "Downbeat" magazine observed that, "Urie succeeds wonderfully in transferring the grime of skid row to the sheen of the concert hall without sacrificing any of the bite and desperate humanity.” Urie's writing recieved 4 stars in Sweden's Lira Magazine, which called his music, "cold, dark, and totally glimmering." Many international publications include Urie's work in their annual top ten lists: All About Jazz, About.com, Slate.com, exclaim.ca, Improv and Avant Garde, The Irish Times, and the El Intruso Critics Poll, among others.