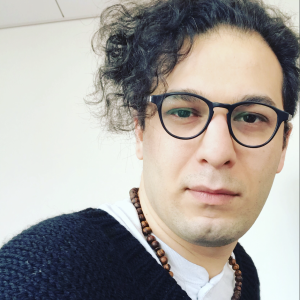 Nima Janmohammadi is a composer, improviser, and multi-instrumentalist. As a performer of Persian classical music, he has studied with great masters of Persian Music, including legendary Mohammad Reza Lotfi and Hossein Alizadeh. He has performed in numerous recordings and concerts, including solo recitals in venues such as Boston's historic Jordan Hall, MIT, Harvard University, Tuft University, and Metropolitan Museum of Art in NY. His solo Setar album, "The Kiss Belongs to Nobody," was published by “a-side records,” as well as the video recording of his live performances. As a composer, he has written for symphony orchestra, chamber music of various large and small ensembles, string quartet, and saxophone orchestra. He has also written open form and graphic scores that incorporate elements of composition and improvisation.

Deeply engaged in both Persian classical music and Western contemporary music, Nima believes that the East does not meet West, but that they collide. It is in the abyss of this collision that new sonic and temporal possibilities interact through a transcendental metamorphosis that exists outside of time, beyond the face of cultural signifiers. The idea of transcendence in Nima’s music is rooted in mysticism, not in its unifying, cyclic, and ritualistic form, but rather in its physical and bodily dynamic of release and constraint, expansion and collapse, chaos and emancipation. These physical phenomena escape narration and signification, and instead, are charged with different densities of energy, most important of which is silence.

As a scholar, his recent involvement in music theory includes the analysis of contemporary music, especially the works of German avant-garde composer Helmut Lachenmann, using Modular Theory and Gilles Deleuze’s concept of Difference and Repetition.

Nima is a full-time faculty in music theory, musicology, and contemporary improvisation departments at New England Conservatory. He has previously taught at Harvard University in 2014 and has had lectures and masterclasses in numerous institutions in the U.S. and abroad.

He holds a bachelor's degree in the performance of Persian classical music from Tehran school of music, a master's degree and a graduate diploma in Contemporary Improvisation (studied with Hankus Netsky and Anthony Coleman), as well as a doctorate in composition with a minor in music theory from New England Conservatory. During his DMA at NEC, he studied composition with Stratis Minakakis, modular theory with Katarina Miljkovic, and was the recipient of the Presser Award and Peter Lyman Row Award.