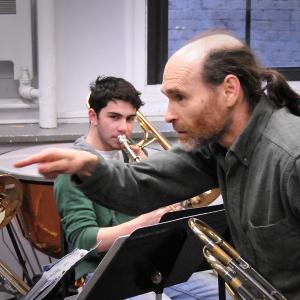 A Tanglewood Fellow and C.D. Jackson Award winner, Bolter joined the Boston Symphony Orchestra in 1975 at age 20, becoming the youngest member of the orchestra at that time. He played with the BSO for 32 years and continues to maintain an active playing and conducing schedule. As well, he was principal trombonist of the Boston Pops Orchestra and was a founding member of the Empire Brass Quintet, which won the prestigious Walter W. Naumburg Award in Chamber Music, the first brass ensemble ever to win this award. Bolter has appeared, as a member of the Boston Pops Orchestra, on the televised PBS favorite "Evening at Pops" with Arthur Fiedler, John Williams, and Keith Lockhart as conductors. He has toured extensively in the U.S., Europe, Asia, and South America with the BSO, the Pops, and the Empire Brass and has made many recordings with them. He also appears as principal trombonist on recordings with Orchestre National Bordeaux Aquitaine. Furthermore, Bolter appears as soloist and/or conductor on five recordings of his own compositions: Experiments in Music, Anew at Home, Occurrences, In Living Continuance, and Phoenix. In addition to his numerous trombone solos, Bolter performed the acclaimed euphonium solo in the BSO recording of Mahler's Symphony No. 7 (Philips, 1990) and also played euphonium on the Minnesota Orchestra recording of Ein Heldenleben by Richard Strauss.

A renowned teacher, Bolter serves on the faculty of New England Conservatory, as well as additional institutions in the area. Bolter's conducting and coaching include brass chamber groups. He founded both the brass repertoire class at NEC and the trombone choir in the NEC Preparatory School, and led the Prep group through 2016. Bolter also has served on the faculties of Mannes School of Music and Boston University, as a member of quintet-in-residence Empire Brass Quintet; the University of South Florida and the University of Massachusetts-Amherst, where he also taught composition; Boston University Tanglewood Institute; and the Tanglewood Music Center. Bolter's students have included not only trombonists, but hornists, trumpeters, and tubists, many of whom hold positions in major symphony orchestras, chamber music groups, and universities around the world.

Bolter regularly conducts masterclasses and clinics in the U.S., Canada, and abroad, including weeklong masterclasses with El Sistema in Venezuela as part of NEC's summer music seminar. Additionally, he codirects the Frequency Band with Dr. Carol Viera, is coauthor, with Dr. Viera, of several publications on music pedagogy and performance, including Methods of Effective Practice, High Range Exercises, It's Not All in the Air, and The Metronome Meditation, and is author/composer of a sightreading book for advanced trombone players, Reading at the Speed of Sight. Bolter also maintains a multimedia music blog, Frequency Bone, via which he also conducts his online summer music camp.

Among the organizations and individuals who have commissioned Bolter's works are: Pro Arte Orchestra of Boston; Zellmer-Minnesota Orchestra Trombone Competition; New York Philharmonic principal trombonist Joseph Alessi; Boston Symphony Orchestra trumpeter Peter Chapman and tubist Mike Roylance; the Online Trombone Journal; the University of St. Thomas; Bala Brass Quintet; and others. In his numerous compositions (over 250 created to date), Bolter explores creating tangible atmospheres inspired by the natural worlds and the human story. His compositions have a broad range of instrumentation, including works for a variety of solo instruments (trombone, trumpet, tuba, horn, flute, didjeridoo, ram's horn, serpent, and others), brass ensemble, trombone choir, concert band, brass band, mixed chamber ensemble, and orchestra. Notably, Bolter has composed more music for the trombone than any other composer.

"Dancers warm-up, athletes warm-up. Even people meeting each other have to warm-up to each other..." From Norman Bolter's blog >