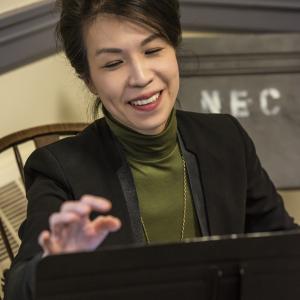 Since coming to the United States from Taiwan, Lee has specialized in the duo repertoire for both strings and woodwinds, and collaborated with some of America’s most important musicians, including her distinguished faculty colleagues at NEC, violinists Margaret Batjer, Ryu Goto, Jacques Israelievitch, Stefan Jackiw, Ani Kavafian, Joseph Silverstein, and Ian Swensen; violists Brian Chen, James Dunham, and Edward Gazouleas; cellists Robert deMaine, Andres Diaz, and Pieter Wispelwey; flutist Jeanne Baxtresser; and pianist James Tocco. She has appeared in concerts with the Ariel, Formosa, Harlem, Jupiter, and Szymanowski String Quartets; members of the Bavarian Radio, Boston, Chicago, Cincinnati, Detroit, San Diego Symphony Orchestras and the Los Angeles Philharmonic. She is also a founding member of DC8, eight musicians sponsored by the Da Camera Society of Los Angeles, dedicated to the commissioning and performance of new music.

A dedicated teacher and devoted to the development of the collaborative piano field, Lee joined the NEC faculty in 2009. Additionally, she created a new master’s degree in Collaborative Piano at California State University Northridge in 2013, and since 2015 she has been serving as director of the new tuition-free Collaborative Piano Fellowship program at the Bowdoin International Music Festival.

In 2006, Lee was appointed pianist for Itzhak Perlman’s violin studio at the Perlman Music Program. Shortly thereafter, she joined the PMP faculty in the Sarasota Winter Residency, and travels regularly with the program to Israel for guest residencies. She was staff pianist at the Cleveland Institute of Music, and served on the summer faculty of the Chautauqua School of Music and Meadowmount School for Strings.

In her hometown of Boston, she has performed at MIT, Boston Ballet, and in recitals with members of the Boston Symphony Orchestra. She also works with the BSO’s guest conductors and soloists, and was the Boston pianist seen in rehearsal with violinist Anne-Sophie Mutter in her documentary “The Portrait.” Her live performances can also be heard on WQXR, WGBH, and WRCJ.

Lee came to the U.S. for piano study after winning the Youth Division of Taiwan’s National Piano Competition. The Cleveland Institute awarded her the Rosa Lobe Memorial Award, in recognition of the highest level of artistic achievement in Collaborative Piano. Her recent recording of the Strauss and Szymanowski Sonatas with violinist Grzegorz Kotow is available on the ArchiMusic label. Frequently invited to China and Taiwan for masterclasses and residencies, Lee's doctoral thesis, The Collaborative Pianist: Balancing Roles in Partnership, has been translated into Chinese and is an important resource for music schools wishing to begin/develop a Collaborative Piano program.