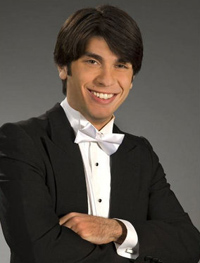 Aram Demirjian, a 25 year old alumnus from the first class of NEC’s prestigious Orchestral Conducting Program, has been named Assistant Conductor of the Kansas City Symphony, effective with the 2012-13 season. Chosen after an intensive audition process in which six invited candidates competed, Demirjian will conduct pops concerts, children’s programs, and educational performances, as well as all of the Symphony’s outdoor appearances, including the annual Symphony in the Flint Hills concert. He will also lead annual performances of Handel’s Messiah and the Christmas Festival. In addition, he will serve as the cover conductor, ready to fill in for the music director Michael Stern or any guest conductor.

Speaking to the rigors of the competition in an article in the Kansas City Star , Stern said, “Some orchestras audition assistant conductors like an afterthought. The Symphony, by contrast puts its candidates through a gauntlet of conducting challenging compositions with the orchestra and one rehearsal with the Kansas City Chorus. They even have to prepare mock speeches so the audition committee could assess their manner of addressing an audience”—a skill that has become essential for contemporary conductors.

Demirjian was the audition committee’s unanimous choice, according to Executive Director Frank Byrne.

Demirjian, who graduated from Harvard University in 2008 with majors in music and government, joined the first class of NEC’s conducting program in 2009.
(along with Joshua Weilerstein, now Assistant Conductor of the New York Philharmonic). At Harvard, he had directed the Bach Society Orchestra. During a summer spent at the Aspen Music Festival, he was awarded the prestigious Robert J. Harth conducting prize

Directed by Hugh Wolff, Stanford and Norma Jean Calderwood Director of Orchestras, NEC’s highly selective two-year conducting program provides intensive coaching and experience for two to five gifted students that includes weekly rehearsals with a laboratory orchestra. In addition, the young conductors gain valuable experience through partnerships with the Boston Pops and the Handel and Haydn Society, where they learn about programming and directing pops concerts and the intricacies of historically informed performance practice.

In sharing the news of his KCS appointment with NEC colleagues, Demirjian wrote: “The Kansas City Symphony is a phenomenal organization, of which I could not be prouder.  Their music director, Michael Stern, and Executive Director, Frank Byrne, are innovative and thoughtful in their leadership, and they are both incredibly supportive of me and my growth as a conductor.  The staff and members of the orchestra showed me nothing but warmth during the audition process, and I am looking forward to a very rewarding experience working with them.   Among KCS's many recent accomplishments is the opening of their new performance venue, Helzberg Hall at the Kauffman Center for the Performing Arts, which after less than a year is already being described as one of the best concert halls in the country.  It's going to be a treat to work in.”

Recognized nationally and internationally as a leader among music schools, New England Conservatory in Boston, MA offers rigorous training in an intimate, nurturing community to 720 undergraduate, graduate, and doctoral music students from around the world.  Its faculty of 225 boasts internationally esteemed artist-teachers and scholars.  Its alumni go on to fill orchestra chairs, concert hall stages, jazz clubs, recording studios, and arts management positions worldwide.  Nearly half of the Boston Symphony Orchestra is composed of NEC trained musicians and faculty.

The oldest independent school of music in the United States, NEC was founded in 1867 by Eben Tourjee. Its curriculum is remarkable for its wide range of styles and traditions.  On the college level, it features training in classical, jazz, contemporary improvisation, world and early music. Through its Preparatory School, School of Continuing Education, and Community Programs and Partnerships Program, it provides training and performance opportunities for children, pre-college students, adults, and seniors.  Through its outreach projects, it allows young musicians to engage with non-traditional audiences in schools, hospitals, and nursing homes—thereby bringing pleasure to new listeners and enlarging the universe for classical music, jazz, and contemporary improvisation.

NEC is co-founder and educational partner of From the Top, a weekly radio program that celebrates outstanding young classical musicians from the entire country. With its broadcast home in Jordan Hall, the show is now carried by National Public Radio and is heard on 250 stations throughout the United States.