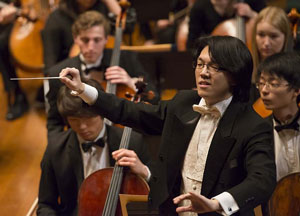 Lio Kuokman ’13 G.D., a native of Macau, has been named assistant conductor of the Philadelphia Orchestra by Music Director Yannick Nézet-Séquin. The one-year appointment was announced April 28 in an omnibus package of new conducting hires that includes Stéphane Denève as principal guest conductor and Cristian Măcelaru as conductor-in-residence. The appointments “add a key element of Music Director Yannick Nézet-Séguin’s artistic vision, assembling a conducting team of like-minded collaborators to bring continuity and excellence in artistic endeavors across seasons and venues,” according to the Orchestra’s press release. The new positions take effect with the start of the 2014-15 season.

Kuokman is the third alumnus of NEC’s prestigious orchestral conducting program to win an important position with a top orchestra. He follows in the footsteps of Joshua Weilerstein '05 Prep, '09, '11 M.M and Aram Demirjian '11 MM., who occupy assistant and associate conducting chairs with the New York Philharmonic and Kansas City Symphony, respectively.

NEC's orchestral conducting program was reorganized and reenergized in 2009-10 under the direction of NEC's Stanford and Norma Jean Calderwood Director of Orchestras, Hugh Wolff. A highly selective, two-year, graduate-level curriculum, the Orchestral Conducting major is designed to develop the artistic, leadership, and aural skills needed to prepare the most talented young conductors for a professional orchestra career. While at NEC, Lio co-conducted the Afghan National Youth Orchestra during a residency at the Conservatory, assisted as a cover conductor for the Boston Symphony Orchestra and Handel and Haydn Society, and served as Assistant Conductor of the NEC Youth Symphony. This, in addition, to rehearsing and performing with the NEC Lab Orchestra.

In his new capacity in Philadelphia, Kuokman will lead select Family and School Concerts, Neighborhood Concerts, Side-by-Side rehearsals, and other ancillary programs. Additionally, he will regularly act as “cover conductor” for Nézet-Séguin and guest conductors throughout the season.

As a keyboard artist of note, Lio has performed as soloist with the Fort Worth Symphony Orchestra, Camerata Salzburg, Romania Bacau Philharmonic, China National Symphony, Hong Kong Philharmonic and Shanghai Symphony Orchestra.  He has performed with members of Les Arts Florissants at New York’s Lincoln Center and is a founding member and President of the Macau Chamber Music Association.

Born in Macau, he began his musical training at The Hong Kong Academy for Performing Arts from which he graduated with first class honors in piano performance. He continued his graduate studies receiving a Masters degree from the Juilliard School followed by a diploma in conducting from the Curtis Institute before coming to NEC.  For his contributions to the development of arts and culture, Lio has received a Certificate of Commendation from the Hong Kong government and an Honorary Diploma from the government of Macau.

ABOUT NEW ENGLAND CONSERVATORY
A cultural icon approaching its 150th anniversary in 2017, New England Conservatory (NEC) is recognized worldwide as a leader among music schools. Located in Boston, Massachusetts, on the Avenue of the Arts in the Fenway Cultural District, NEC offers rigorous training in an intimate, nurturing community to undergraduate, graduate, and post-graduate music students from around the world. Its faculty of 225 boasts internationally esteemed artist-teachers and scholars. NEC alumni go on to fill orchestra chairs, concert hall stages, jazz clubs, recording studios, and arts management positions worldwide. Half of the Boston Symphony Orchestra is composed of NEC-trained musicians and faculty.

NEC is the oldest independent school of music in the United States. Founded in 1867 by Eben Tourjee, an American music educator, choral conductor and organist, its curriculum is remarkable for its wide range of styles and traditions. On the college level, NEC features training in classical, jazz, and Contemporary Improvisation. Graduate and post-graduate programs supplement these core disciplines with orchestral conducting and professional chamber music training. Additional programs, such as the Sistema Fellows, a professional training program for top postgraduate musicians and music educators that creates careers connected to music, youth, and social change, and Entrepreneurial Musicianship, a cutting-edge program integrating professional and personal skills development into the musical training of students to better develop the skills and knowledge needed to create one’s own musical opportunities, also enhance the NEC experience.

Through its Preparatory School, School of Continuing Education, and Community Programs and Partnerships Program, the Conservatory provides training and performance opportunities for children, pre-college students, and adults. Through its outreach projects, it allows young musicians to engage with non-traditional audiences in schools, hospitals, and nursing homes—thereby bringing pleasure to new listeners and enlarging the universe for classical music, jazz, and Contemporary Improvisation. Currently more than 750 young artists from 46 states and 39 foreign countries attend NEC on the college level; 1,400 young students attend on the Preparatory level; and 325 adults participate in the Continuing Education program.

The only conservatory in the United States designated a National Historic Landmark, NEC presents more than 900 free concerts each year. Many of these take place in Jordan Hall (which shares National Historic Landmark status with the school), world-renowned for its superb acoustics and beautifully restored interior. In addition to Jordan Hall, more than a dozen performance spaces of various sizes and configurations are utilized to meet the requirements of the unique range of music performed at NEC, from solo recitals to chamber music to orchestral programs to big band jazz, Contemporary Improvisation, and opera scenes. Every year, NEC’s opera studies department also presents two fully staged opera productions at the Cutler Majestic Theatre or Paramount Center in Boston, and a semi-staged performance in Jordan Hall. This past 2012-2013 season, the operas produced were Gluck’s Orfeo ed Euridice, Britten’s The Turn of the Screw, and Rossini’s La Gazzetta.

NEC is co-founder and educational partner of From the Top, a weekly radio program that celebrates outstanding young classical musicians from the entire country. With its broadcast home in Jordan Hall, the show is now carried by National Public Radio and is heard on 250 stations throughout the United States.