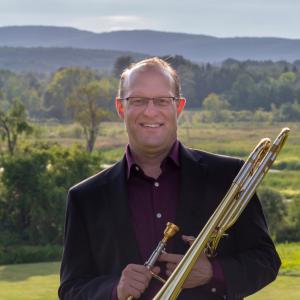 Brian Diehl is a Boston based trombonist who performs and teaches throughout New England. Beginning in 2011, he serves as Principal Trombonist with the Hartford Symphony Orchestra, under the direction of conductor Carolyn Kuan.  Additionally, since 2007, he has also held the position of Principal Trombone with the  Springfield Symphony Orchestra, under the direction of conductor Kevin Rhodes, which had also included performing at the Berkshire Choral International Festival until 2017, when it ended.  Since September 2016, he has also performed with the newly formed Berkshire Opera Festival Orchestra (Madame Butterfly, Rigoletto, Ariadne auf Naxos, and Don Pasquale).  Additionally, he has performed with many regional orchestras and ensembles throughout New England, including the Rhode Island Philharmonic, Albany Symphony, Portland Symphony, Boston Lyric Opera, Boston Philharmonic Orchestra, Boston Landmarks Orchestra, and Boston Modern Orchestral Project (for which he has recorded several albums of new music). Mr. Diehl has also performed with the Boston Symphony Orchestra, Boston Pops, and Boston Pops Esplanade Orchestra.

Mr. Diehl is an avid soloist and proponent of contemporary trombone literature.  In 2018 he performed to critical acclaim the North American premiere of Takashi Yoshimatsu’s Trombone Concerto, Orion Machine, with the Springfield Symphony Orchestra, under Kevin Rhodes’ direction.  Additionally, a newly written work for trombone and piano, Genial Giant, commissioned by his brother Bruce Diehl, was completed by Amherst, MA, composer Eric Sawyer in 2017 was premiered at a Faculty Recital at New England Conservatory in March 2018. He presented four performances of John Mackey’s Harvest, Concerto for Trombone and Orchestra during the 2014-15 season finale Masterworks Concerts of the Hartford Symphony to wild acclaim.  He has written an improvisatory piece entitled “the Lesson- pas de deux”, a short work describing his experiences as both student and teacher, and has received notable laughs and quips.  Past commissions include works by composer/pianist Sanae Kanda, who wrote “A Folk Tune” (2012), as well as the trombone edition of “Morgandammerung” for a Spotlight Recital at University of Southern Maine in Gorham.   Other past commissions include Anthony DiLorenzo’s Concerto for Trombone and Orchestra "Little Buckaroo" (1995) and Lauren Bernofsky’s solo "Devil’s Dermish" (1997), and have received rave reviews throughout the world since their premieres.   He has performed as a solo guest artist with the National Repertory Orchestra in Colorado, and as a soloist with the New World Symphony and the Florida West Coast Symphony (now the Sarasota Orchestra). Mr. Diehl received a fellowship at the Tanglewood Music Center for two seasons, where he  worked under conductors Leonard Bernstein, Seiji Ozawa, Simon Rattle, Jeffrey Tate, and Marek Janowski. He received a three-year Fellowship with the New World Symphony (1992-95), under the direction of Michael Tilson Thomas, with whom he toured and recorded extensively. Mr. Diehl has also arranged solo trombone music for special performances and area church services.

One of Mr. Diehl’s passions is performing Chamber Music.  He has been active throughout his career in groups from Brass Quintets to solo work within an unlike ensemble, such as Roger Goeb’s Quartet for String Quartet and Trombone (performed at the Musicorda String Festival).  He is a member of two working brass quintets, Epic Brass (with whom he has toured and taught extensively), and Innovata Brass (a wonderful group of Boston-based players who tour and record a unique program of music).  Lauren Bernofsky’s Passacaglia for Brass Quintet was dedicated to Brian, as he performed it’s world premiere at New England Conservatory. It’s subsequent reworking for Trombone Ensemble achieved wild acclaim at University of Southern Maine.

Mr. Diehl is a former member of the New World Brass, a quintet made up of the principal players of the New World Symphony, with whom he toured and recorded Ingolf Dahl’s Music for Brass (from Defining Dahl, on the Argo label).  He has also performed at the US Embassies in Paris, in Monaco, and in music festival at the Cayman Islands.

Mr. Diehl maintains a rigorous teaching schedule in addition to his many performance activities.  He is a Low Brass Teacher and Chamber Music Coach at New England Conservatory’s Preparatory School, as a member of the NEC Prep Faculty Brass Quintet.  Additionally he teaches numerous high school-aged musicians at Walnut Hill School for the Arts, in Natick, MA, in Concord, MA, as well as in his studio in Andover, MA. His book Low Brass Essentials has been a text for numerous brass students and has been used at schools such as Northwestern University and University of Southern Maine.  His is one of the featured interviews in the  August, 2015 edition of  the musician’s trade magazine “Brass Herald”.

Many of Mr. Diehl’s high school students hold positions in the major Boston-area Youth Orchestras, as well as the Massachusetts All-State Festival Orchestra and Band.  He has served as Low Brass faculty coach for the Boston Youth Symphony Orchestra, as well as faculty teacher and coach with the Foundation for Chinese Music in Boston.  He has given masterclasses at the Eastman School of Music, Hartt School of Music, Boston University, University of Connecticut, University of Massachusetts- Amherst, and Eastern Washington University,  and at summer festivals including the National Repertory Orchestra and the Tanglewood Empire Brass Seminar.  Additionally, he serves on the Artist Faculty at University of Southern Maine (Gorham).  Past teaching posts have included the University of South Florida (Tampa), Manatee Community College (Bradenton, FL), Miami-Dade Community College, as well as Florida International University (Miami).

During the late 80’s, at the height of the Cold War, he was chosen as Principal Trombonist of the American-Soviet Youth Orchestra, performing under Zubin Mehta and Dmitri Kitayenko in major cities in both countries.  After graduating from the Interlochen Arts Academy (where he received the Fine Arts Award for Brass), trombonist Brian L. Diehl, a Maine native, received his B.M. from Northwestern University (recipient of High Department Honors) and his M.M. from the New England Conservatory of Music (becoming the first brass player at NEC to receive the Rabb Presidential Scholarship and the Theodore Presser Award).  While at NEC, he was a concerto competition winner with the New England Conservatory Orchestra.   Mr. Diehl was chosen as a Finalist in the Houston Symphony’s “Ima Hogg” Concerto Competition (1994) and has done solo work with the trombone seminars of Christian Lindberg and Joseph Alessi.  Past teachers include Frank Crisafulli, Jay Friedman, Joseph Alessi, John Swallow, Norman Bolter, and Douglas Yeo.