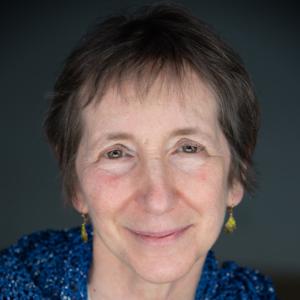 Pianist Lois Shapiro “conjures enchantment” and “produces and inspires musical magic,” notes The Boston Globe. A New York Concert Artists Guild Award winner and highly sought-after soloist and collaborative pianist, she has appeared throughout the U.S. and abroad in concerts ranging from 18th-century period-instrument performances to premieres. In May 2013, Shapiro performed and gave a workshop at the Universität für Musik und darstellende Kunst in Vienna. Shapiro has recorded on Afka, Bridge, Channel Classics, Centaur, MLAR, and Pierrot. Her 1996 duo recording with cellist Rhonda Rider was cited as “Best of the Year” in The Boston Globe.

Formerly an instructor of piano at Smith College, Brandeis University, New England Conservatory, and the Longy School of Music, Ms. Shapiro is currently on the faculty of Wellesley College, Rivers School Conservatory of Music, and NEC prep, teaching chamber music and piano.

Ms. Shapiro was a founding member of the piano trio Triple Helix, with violinist Bayla Keyes and cellist Rhonda Rider. They were Artist Ensemble-in-Residence at Wellesley College from 1999-2012;  at Project STEP, from 2013-2017, where she created a highly successful collaborative project in which composition students at Tufts University wrote solo string pieces for individual students; and, from 2012 to 2015 at the Rivers School in Weston, MA. Triple Helix augmented its schedule of performances and masterclass with innovative, wide-ranging interdisciplinary lecture-recitals. Critically acclaimed nationally, and a winner of the Chamber Music America Commissioning Grant, the group was named “Best Chamber Music Ensemble in Boston” for three years in a row (2000-2002) and “MUSICIANS OF THE YEAR” for 2002, in The Boston Globe.

She has given numerous masterclasses and lectures on subjects such as the nature of musicianship, late-Beethoven piano sonatas, and Robert Schumann’s music in cultural context. As an expression of her abiding interest in bringing the musical experience to under-served populations, she was recently awarded an Alumni Ventures grant from Yale University, to create and offer innovative interdisciplinary music programs in the Boston public schools. Always seeking to inspire music-lovers of all ages, Ms. Shapiro created an intergenerational orchestra and, in collaboration with the Longy School of Music Dalcroze Department, she co-produced a series of engaging and highly popular family programs in which she performed as narrator and pianist. She received her musical training at the Peabody Institute of Johns Hopkins University, Yale University, and the New England Conservatory.

Richard Dyer has said of her playing, “She is a wonderful artist and a dangerous person to work with…What makes her dangerous is her imagination and her insight; these lead her directly into what is most interesting about the music. And her technical resources are such that she is able to do exactly what her imagination and insight intend…Shapiro has the great gift of making everything she does sound inevitable even when it is surprising.”