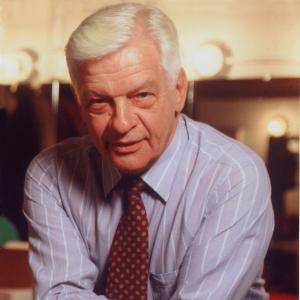 John Moriarty studied at New England Conservatory through 1952 and was an important figure in American opera thereafter. His involvement with opera performance at NEC carried over many decades in various guises, including a joint performance program with the Boston Conservatory in the 1980s and a fully fledged program based exclusively at NEC that he led from 1989 to 2001. Moriarty then continued to serve as a core member of the vocal coaching faculty through his retirement in 2015.

Moriarty has conducted and stage directed productions at opera companies throughout the U.S. He was artistic director of Central City Opera through the 1997–98 season, at the conclusion of which—after 20 years with the company—he was named artistic director emeritus. He has been artistic administrator at the Santa Fe Opera and the Washington Opera Society, and administered apprentice artist programs at Santa Fe, Lake George, Wolf Trap, and Central City.

Moriarty is a Trustee Emeritus of the William Matheus Sullivan Foundation, and on the Advisory Board of the Shoshana Foundation. He has been conductor and/or stage director with these companies and with Opera Theatre of St. Louis, the Colorado Symphony, Boston Lyric Opera, and Oklahoma City Opera.

Moriarty has conducted masterclasses and workshops across the U.S. and at the NATS national convention. He has been a piano soloist with the Boston Pops, the Boston Civic Symphony, and the Radio Eireann Orchestra of Dublin. He has had numerous articles published and is the author of Diction.